Recently, I offered a post on the street where I live. As I went through some older photos, later, I found two that I had made off old postcards, on the same street more than a century ago. I thought perhaps some of you would enjoy seeing them. 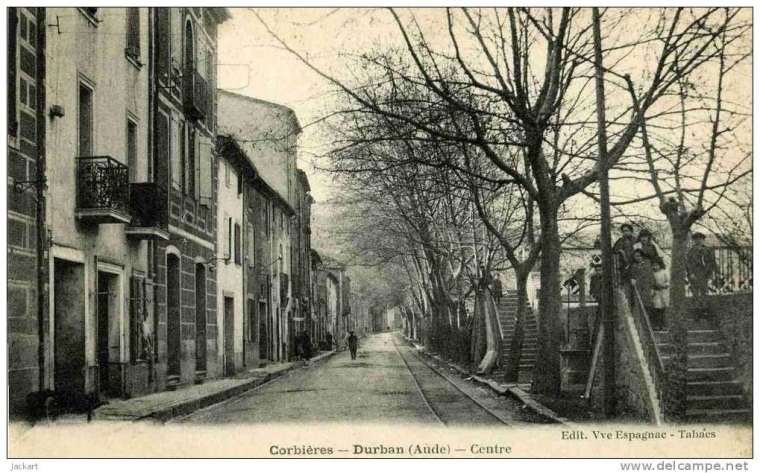 If I am correct, my home should be just past that group of people seen exiting, or perhaps entering, a house mid-way on the left.  While the foot bridge has a set of steps in each direction, the other side is not visible from this view. It is the second set of steps that appear further back that exist today as you can see if you check out the post of 5 August 2018. Inbetween the sets of stairs, you can see the old pump which still exists, and works, though rarely used.

If you look closely at the road, you can see some tracks for the old train that used to come through the village. A neighbor has just informed me that a small steam train ran from Portel des Corbières to Tuchan until the 1930’s. At different points it would connect and one could get into Narbonne which had a large number of trains that could take you to many destinations.

Some of the houses have interesting patterns on their walls which have long been covered up by renderings. Those patterns would be consistent with the era  As you can see it is winter time as the trees are bare and the people at the top of the staircase appear to be bundled up against the cold weather. 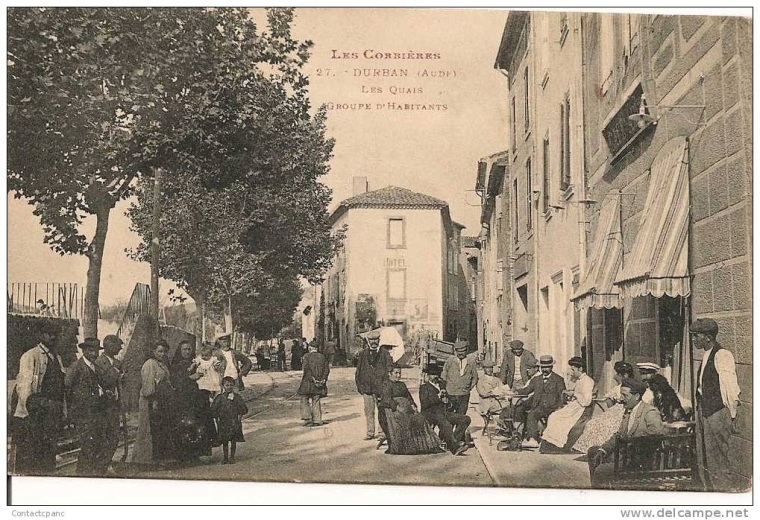 From this second photo you can see there was an épicerie (grocery) just next to where the café was located at that point in time.  No doubt you could stop in and pick up a fresh baugette with ham and or cheese and a thick spread of butter and wash it down with a glass of wine or beer. That is not where it was when I moved here over a decade ago nor where it is now located at the other end of the village. You get a look at the foot bridge that is no longer there, What you don’t see is that there was attached an outdoor toilet, how appropriate across from where everyone is eating and drinking.  The café in this photo had been altered by its owners years later and for many years served as the village pharmacy. At some time after WWI, a number of balconies where added including the old pharmacy as you can compare if you look at the post referred to earlier. https://foundinfrance.wordpress.com/2018/08/05/on-the-street-where-i-live-a-challenge/

I can see, to the left, how high the wall along the river used to be. It has been lowered some years ago. As you can see, the wall is higher than most of the people near it. I am barely five feet tall myself and the wall now, in some areas, is little higher than my waist. Before you ask, nothing around here is level so we shall move on.  It appears to be Spring or possibly early Summer as the trees are quite filled out with leaves and some of the citizens are in shirt sleeves. As you can see, everyone is glad of the opportunity to socialize with their neighbors on a beautiful day as the sunlight filters through the trees. I find it fascinating that in these photos could be former owners of my own home.

Perhaps I can find more such photos and if so, I shall share them here on the blog.