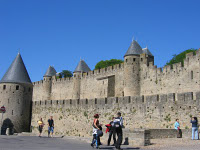 The origins of Carcassonne are traced back to the 4th C BC.  In the 2nd Century BC it served as a strategic outpost fortified by the Romans, who gave it the name Carcassonne. The Visigoths succeeded the Romans and overran Gaul in the 5th C AD. When they converted to Christianity, it became a diocese. In the 8th Century the fortress fell to the Franks who later defended the city against attacks from the Saracens.  The Emperor Charlemagne besieged the town in 795, and was held by Dame Carcass, a Saracen princess. After a five year siege, the only food left was one little pig and a bag of corn. Dame Carcass gave the bag of corn to the pig and sent it out to the ramparts. Charlemagne raised the siege, since he thought there was enough food even to feed a small pig. Before the Emperor left, Dame Carcass rang out the bells making them sound the word Carcassonne.  In 1209, Crusades from the north came down the Rhone valley to stamp out the heretic Cathars. The Viscount Raymond Roger Trencavel publicly offered protection to all those being hounded by the northern invaders.  After sacking Beziers, the crusading army besieged Carcassonne. Despite the leadership of a youngl Trencavel, in his early 20’s, the town was forced to surrender after only two weeks through lack of water.  The Army council appointed Simon de Montfort, Viscount of Carcassonne in place of Trencavel.
Within a year Trencavel was found dead in the tower where he was being held prisoner.  In 1240 Trencavel’s son tried in vain to recapture Carcassonne by siege. Although his mines and missile breached the walls, he was forced to retreat by the royal army.  St Louis IX had the small towns around the ramparts razed and the town’s inhabitants paid for their rebellion with seven years in exile. Upon their return they were permitted to build a town on the opposite side of the river Aude- the present Ville Basse. The walled city was repaired and reinforced. When finished, it was so well fortified it was regarded as impregnable.  Successive kings reinforced Carcassonne because of its strategic importance close to the border with Catalonia. However, in 1659, the Treaty of the Pyrenees restored the region of Roussillon to France. The new border was now 200kms away, The city of Perpignan now guarded the frontier. Carcassonne’s military importance dwindled and was eventually abandoned and left to decay.
When I first visited France in the spring of 2006, I spent a week in La Cité staying at the hostel and exploring the area. Before arriving, I began reading the book Labyrinth by Kate Mosse. Her descriptions of the area were so vivid and I felt I had stepped into the pages of the book.
Bisous,
Léa
Advertisement