Skip to content
Recently, I introduced you to Marchè Noël in a small village of approximately 700 people.
In a town like Narbonne or Carcassonne with a population of over 50,000, the Christmas Market is on a grander scale and the items available more varied. There are often rides for the young children and even a giant slide or a temporary ice rink assembled in the town square. 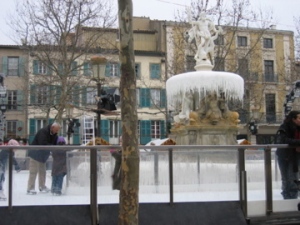 Both towns are tourist destination in southwestern France in the    Languedoc-Roussillon
region.
Narbonne was the first Roman colony outside of Italy, and was located at the crossroads of the via Domitia, the Roman road linking Italy to Spain. In a future post, we can explore more about the famous via Domitia. While I have not noticed traditional carol groups, the giant puppets wander around the streets of town.
Carcassonne draws thousands of tourists each year. Carcassonne’s  medieval fortress is a city unto itself. The town of Carcassonne was built up around La Cité and the River Aude. The temporary skating rink is set up in 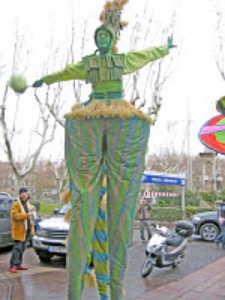 Place Carnot which is the center of Carcassonne and filled with shops and wonderful cafes. While it looks very cold, the ice on the fountain is added for effect. Most likely, you would be comfortable sitting outside with a cafe or hot chocolate. Between the center of town and La Gare (train station) a giant slide is erected and cabins are set up to sell crafts, food, chocolat chaud (hot chocolate), vin chaud (hot spiced wine) and other seasonal and regional delights. Both towns have much to offer and will be visited again in future posts.
Bisous,
Léa
Advertisement